FULTON, Md. (February 14, 2019) — Plamondon Hospitality Partners of Frederick, Maryland, is excited to announce that their newest hotel, the 103-suite Residence Inn by Marriott in Fulton, is now open and accepting reservations.

“We are excited to officially be part of the Maple Lawn community,” said Peter Plamondon, Jr., co-president of Plamondon Hospitality Partners. “We’ve got an incredible team in place to ensure that each guest’s experience at this new hotel is exceptional.”

Newcomer and Associates, Inc. of Chambersburg, Pennsylvania, was the architect on the project, and Waynesboro Construction Co. from Frederick, Md., managed the hotel’s construction.

Joanna Tootill, Area Sales Manager
Joanna brings a wealth of hotel experience to the Plamondon Hospitality Partners team. Prior to joining PHP, she worked in the Washington, D.C., market as an area account executive for Marriott International. As the new area sales manager, Joanna will oversee account management for the company’s six hotels in Frederick and Hagerstown.

Stan Martin, General Manager
Stan brings more than 30 years of hotel experience in a wide variety of management and above property roles, for both independent management companies and Marriott International. Most recently, he served as the interim general manager for Plamondon’s Fairfield Inn & Suites and TownePlace Suites in Altoona, Pa. Stan joins the PHP team as the general manager of the new Residence Inn by Marriott Columbia/Fulton.

FREDERICK, Md. (August 23, 2018) — Plamondon Hospitality Partners has announced the promotion of Sharon Bear to Director of Sales and Revenue Management.

Sharon began working for Plamondon Hospitality Partners in 2006 as the General Manager of the Courtyard by Marriott Frederick. Throughout her time with the company, she has served in many different roles and has supported a variety of job functions. In 2010 she was promoted to Dual General Manager of the SpringHill Suites by Marriott Hagerstown and the Courtyard by Marriott Hagerstown. She later returned to Frederick as an Area General Manager, overseeing the company’s four Frederick hotels. Then, in April 2016, was promoted to the role of Regional Manager, overseeing all of the company’s Maryland hotels. She celebrates her twelve-year anniversary with Plamondon Hospitality Partners this month.

In her new position, Sharon will take on a more active role in overseeing the sales teams at the company’s four Frederick hotels; two Hagerstown, Md., hotels; two Altoona, Pa., hotels; one Grovetown, Ga., hotel; and the hotel opening later this year in Fulton, Md. She will also be responsible for directing revenue management and sales strategies for the company’s entire hotel portfolio, which spans three states and several brands.

Peter Plamondon, Jr., Co-President of Plamondon Hospitality Partners, said that Sharon is an enthusiastic team player who continues to prove herself in the industry.

“We are very excited to see Sharon take on this new leadership role within our company,” said Plamondon. “She has been an exemplary leader for our sales team, and we’re confident that her hard work and dedication will continue in this new role and enhance our sales efforts.”

Sharon has won several major industry awards during her tenure at Plamondon Hospitality Partners. In 2012 she was named a Diamond Manager of the Year for the Courtyard by Marriott brand, and was ultimately presented the General Manager of the Year award for the brand. In 2014, the Maryland Hotel Lodging Association named her a Star of the Industry and the Hotelier of the Year. 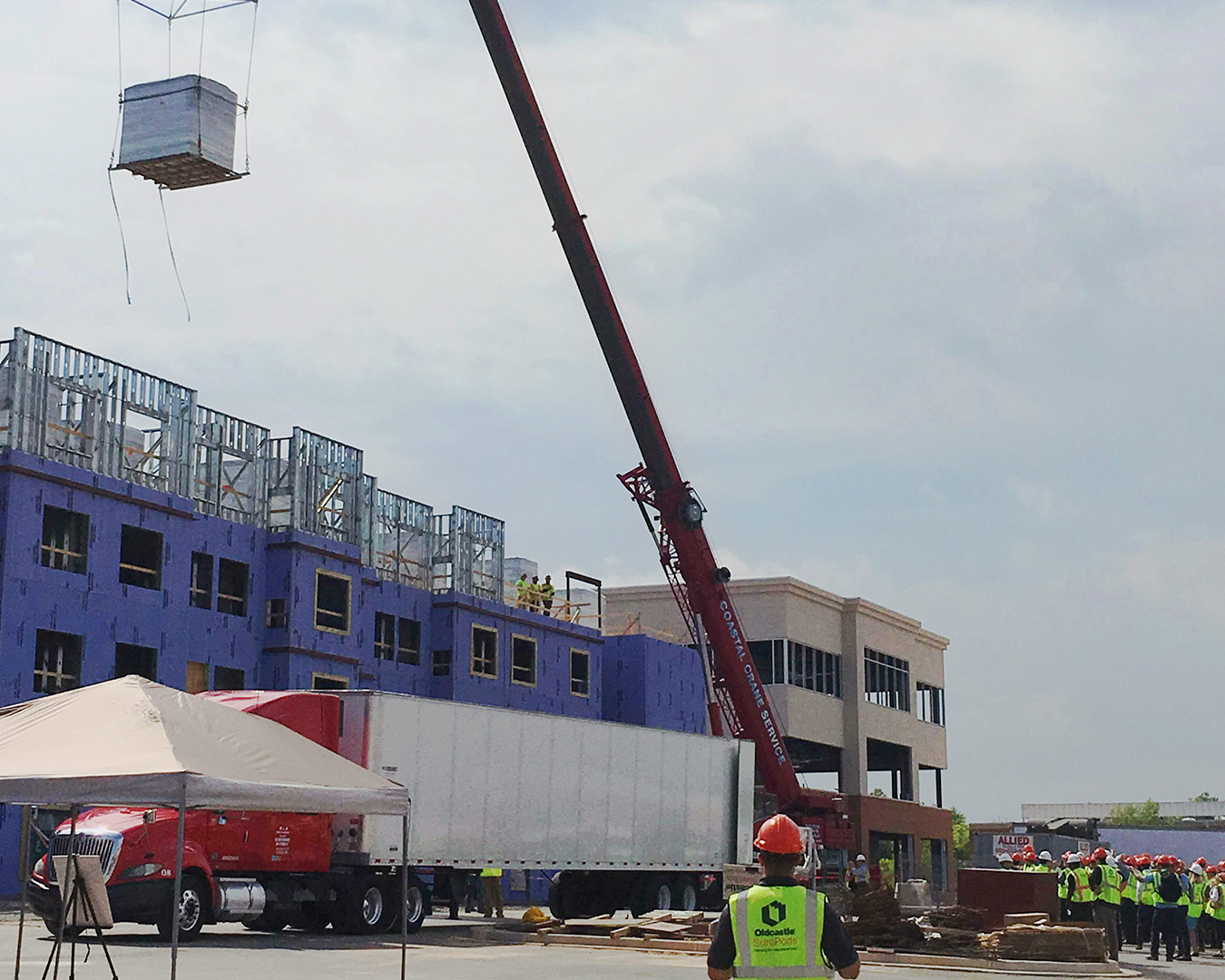 Nearly 200 industry leaders, including developers, contractors and architects, geared with hard hats, watch as bathroom pods are stacked into place at the Residence Inn by Marriott Columbia/Fulton construction site.

FREDERICK, Md. (June 4, 2018) — Plamondon Hospitality Partners is continuing construction on their newest property, the Residence Inn by Marriott Columbia/Fulton in Fulton, Md., with innovative modular construction of the property’s guest bathrooms. Unlike traditional construction methods, modular construction avoids time-consuming challenges that can delay the project, such as skilled labor shortages and poor weather. This process also allows more opportunities for inspection throughout the entire manufacturing process, resulting in a higher quality end product.

For this property, Oldcastle® SurePods™ of Orlando, Fl., manufactured hotel bathrooms away from the construction site in a climate-controlled factory. After they were complete, the prefabricated units were transported to the hotel site, where the hotel’s foundation was already built. The units were stacked into place by a crane, at which point workers began the process of completing the installation on-site, including the connections for electrical, plumbing and other finishing work.

Marriott International opened its first hotel using modular construction in Folsom, Calif. Since the success of that initial hotel, they have encouraged a select group of owners, including Plamondon Hospitality Partners, to utilize the construction method. Marriott and Oldcastle hosted an event on May 10, 2018 at the construction sight of the Residence Inn by Marriott Columbia/Fulton to present the modular installation to attendees from across the country.

“Marriott is known for innovation, so we have no doubt that the modular construction process will open new opportunities within the hospitality industry. We’re excited to be implementing this construction process into our newest property in Maryland, after seeing Marriott’s success with the build in California,” said Peter Plamondon, Jr., co-president of Plamondon Hospitality Partners.

Plamondon Hospitality Partners broke ground on this property in November 2017 and expects to open later this year. The new extended stay hotel is located within Fulton’s Maple Lawn community, and will bring 103 rooms to the area. The hotel will be LEED certified, and will feature car charging stations, an indoor pool, a state-of-the-art fitness room, meeting space and an outdoor patio with fire pits. The Residence Inn will also have meeting space that will accommodate up to 100 guests.

Henningsen began working for Plamondon Hospitality Partners in June of 1999 as the Director of Hotel Operations. At the time he started, the company had just two hotel properties in Maryland. Henningsen has been a vital part of the company’s growth, as they are currently developing their 10th property and operate hotels across Maryland, Pennsylvania and Georgia.

Peter Plamondon, Jr., Co-President of Plamondon Hospitality Partners, said that Henningsen is a recognized leader, and respected by his peers, direct reports and the lodging and tourism communities.

“Mike’s enthusiastic leadership of our hotel division and his commitment to our values and high standards has been exemplary,” said Plamondon. “He has been instrumental in our company’s growth over the past 19 years, and continues to be a key executive of the Plamondon team.”

Henningsen has worked in the hospitality industry for more than 35 years, and donates his time to many area nonprofit organizations. He is the past president and current board treasurer for the Tourism Council of Frederick County, and is a former board member for the Weinberg Center for the Arts, also in Frederick. He currently serves as the association chair for the Maryland Hotel Lodging Association, an organization that recently named him the Maryland Hotelier of the Year at their annual Stars of the Industry Awards ceremony. 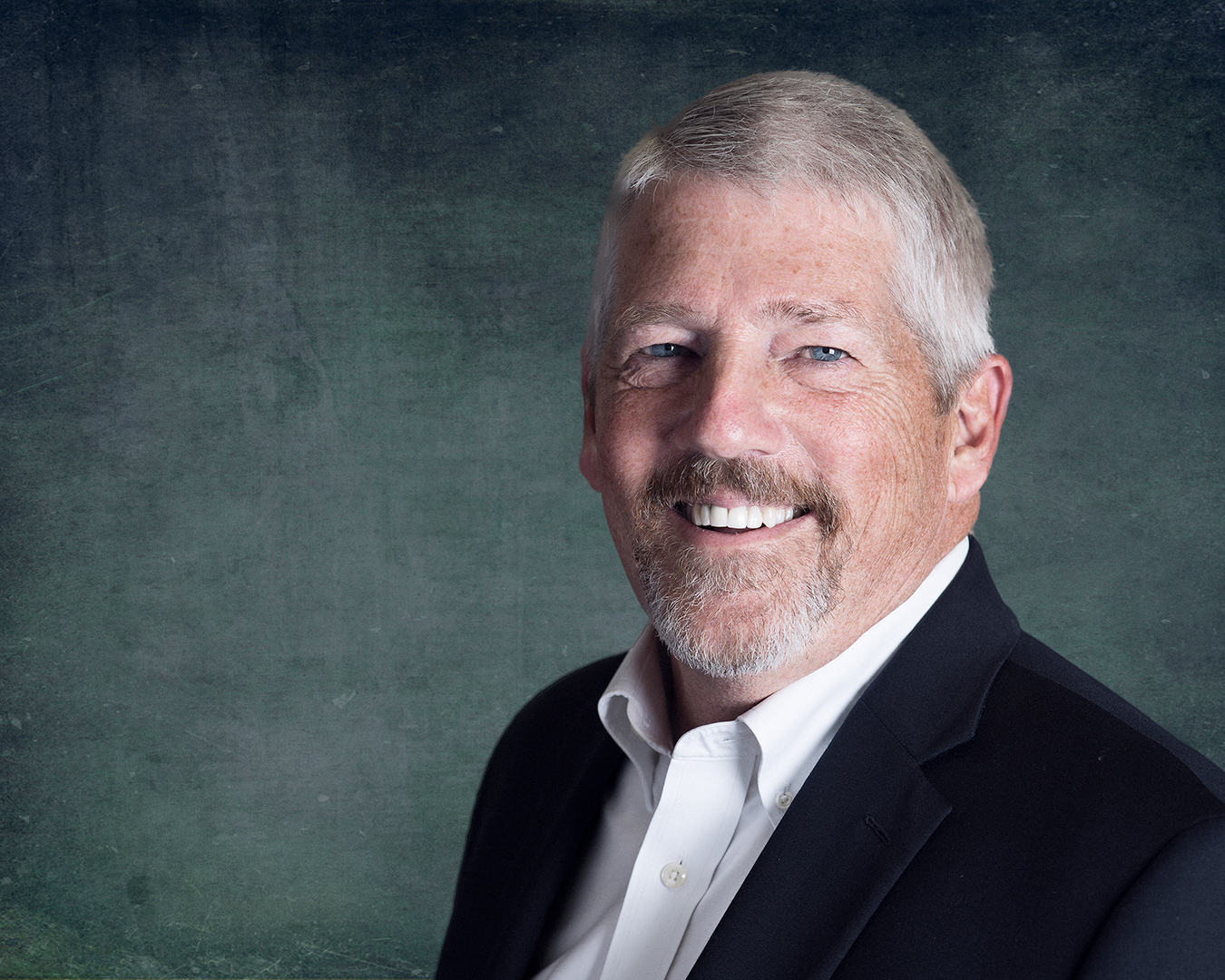 BY plamondon February 22, 2018 Hotelier of the Year,MHLA,Michael Henningsen

FREDERICK, Md. (February 22, 2018) — Michael Henningsen, director of hotel operations at Plamondon Hospitality Partners, has been named the Maryland Hotelier of the Year by the Maryland Hotel Lodging Association (MHLA).

The distinguished award, which is only given out in rare instances, was presented at the organization’s 29th annual Stars of the Industry Awards on Thursday, February 8, 2018 at the Bethesda North Marriott Hotel and Conference Center in Rockville, Md.

Amy Rohrer, president and CEO of MHLA, can only recall one other person winning this award in the twelve years that she has been associated with the organization. She said that the MHLA board of directors chose Henningsen to receive the award because of his extraordinary contributions to the hospitality industry, at both the state and local levels.

Henningsen has worked in the hospitality industry for 35 years, including the past 19 years that he has been employed by Plamondon Hospitality Partners in Frederick, Md. He currently serves as the association chair for MHLA.

Peter Plamondon, co-president of Plamondon Hospitality Partners, said that Henningsen is a recognized leader, and respected by his peers, direct reports and the lodging and tourism communities.

“Mike has been a driving force in our company’s growth since 1999, and it is a great privilege to work with him each day,” Plamondon said. “His drive and professionalism inspire others around him, and his strong commitment to community is evidenced by his many past and present leadership roles in various nonprofit organizations.”

Henningsen has always found ways to serve in his home community of Frederick. He is the past president and current board treasurer for the Tourism Council of Frederick County, and is a former board member for the Weinberg Center for the Arts, also in Frederick. Plamondon Hospitality Partners frequently hosts blood drives for the American Red Cross, something that Henningsen, a former chairman of the board for the Red Cross in Frederick, has always been a part of.

John Fieseler, executive director of the Tourism Council of Frederick County, attended the event and was on stage to present the award.

“The Frederick community has greatly benefitted from Mike’s commitment and passion, and he has helped raise the bar for the local lodging industry,” Fieseler said.

The Maryland Hotel Lodging Association is a trade based membership organization representing hotels across the state and related industry and service providers. The organization strives to actively advance the interests of the lodging industry in Maryland at the state and local levels. The annual Stars of the Industry Awards program honors lodging employees and properties that best symbolize quality service within the industry.

The new extended stay hotel is located within Fulton’s Maple Lawn community, and will bring 103 rooms to the area. The hotel will be LEED certified, and will feature car charging stations, an indoor pool, and an outdoor patio with fire pits. The Residence Inn will also have meeting space that will accommodate up to 100 guests.

“We believe that this project will enhance and attract further economic development to Maple Lawn and, indeed, Howard County,” said Peter Plamondon, co-president of Plamondon Hospitality Partners. “We seek to be a partner with the various constituencies of this market, and we are looking forward to becoming part of the Maple Lawn community.”

Newcomer and Associates, Inc. out of Chambersburg, Pennsylvania, will be the architect on the project, and Waynesboro Construction Co. from Frederick, Md., will be handling the hotel’s construction. Both companies have worked with Plamondon Hospitality Partners in the past, and have proven to be successful partners for the company.

Plamondon Hospitality Partners owns and operates a Residence Inn by Marriott in Frederick. This will be their first hotel in Howard County, and their fifth in Maryland. They also have hotels in Altoona, Pennsylvania, and Grovetown, Georgia.